The Beauty by Aliya Whiteley: In a world where all women have died, a group of men live out their last lonely days in The Valley of Rocks, listening to young Nate tell stories that weave their past and remaining years into a cohesive whole – then the strange mushrooms start growing in the cemetery and everything changes. At times gory, at other times sublime, and definitely weird The Beauty’s a creepy read.

Persona by Genevieve Valentine: SF novel about a world where celebrity “Faces” represent countries and perform international politics while all actual politics are hashed out behind closed doors, except one Face is starting to take her job seriously and actually aid her constituency. Persona’s light on world building and heavy at times on breathless melodrama, but it’s even heavier on the speedy pulp paranoia that I enjoy. 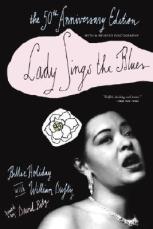 Lady Sings the Blues by Billie Holiday (with William Dufty): Harrowing but great autobiography of Billie Holiday. There are a lot of sad and bitter details here. Not only in regards to the racism she had to bear, but the harassment she encountered while trying to seek treatment for her heroin addiction. But all that was what I expected. The bit I didn’t expect and left me shocked was that she smoked a carton of cigarettes a day. A CARTON!?!

The Glory of the Empire by Jean D’Ormesson: Fake history full of fake metaphysics and fake conflicts that purportedly shaped the ancient and early modern worlds. I LOVE BOOKS LIKE THIS! It starts back in the ancient era with a legendary feud between brothers, tumbles forward through the ages, detailing wars, uprisings, and eras that never happened, speaking of kings and queens and personages who never existed – but might have, making something of a shadow history of the world. It’s a wee bit stodgy at times, but take it slow and it’s worthwhile.