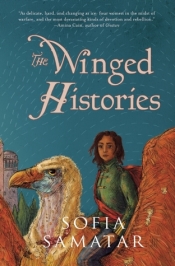 The Winged Histories by Sofia Samatar: Epic fantasy that doesn’t read like Epic Fantasy is my favorite Epic Fantasy (unless we’re talking about novellas, in which case I have more patience for 400 page “world building” tom foolery). The Winged Histories is that kind of Epic Fantasy. Less a sequel to A Stranger in Olondria than a continued journey into the same world of, in The Winged Histories we follow four women as each tells their stories and is caught in the turmoil of the Olondrian civil war. Some of them are archetypal Epic Fantasy characters such as the Warrior Woman, but Samatar manages to subvert and comment on these characters, as she delves deeper into her setting. I loved this book.

Hard Light by Elizabeth Hand: This is Hand’s third novel featuring the fascinatingly horrible person Cassandra Neary, who’s less an amateur detective than a destructive bystander. If you haven’t read any of these before this one is a decent one to start with, as Cass ends up in London and collides with various counter-culture victims and survivors, and a mystery straight off the Graham Hancock web page. There’s sort of this preposterousness to the novels, like who knew such attention to rock fandom from the 1970s would prove to be so important in 2015, but yeah, if you can swallow that and stomach Cass’s general awfulness the novels are great fun.

The Fortunate Fall by Raphael Carter: A latter stage cyberpunk novel from the late 1990s, The Fortunate Fall tells about a 24th century journalist on the trail of the truth concerning some 23rd century atrocities. It’s weird, smart, and fun while it gets at concerns regarding free will in a world of manufactured personalities. If you’ve read and liked Pat Cadigan’s stuff, you’d likely enjoy this. Unfortunately, it appears to have been Carter’s only novel (to date) and it’d be fascinating to see what they would publish now twenty-years on deeper into The Matrix. Are we still on schedule for the Unanimous Army to free us from conscious thought with their drill-bits? Or was that a best case scenario?

The Blackbirder by Dorothy B. Hughes: The other covers for this are a lot cooler, but this one was the one I read. The Blackbirder is a 1940s crime novel about a refugee woman from France in the USA illegally on the run from the Gestapo and the FBI when an old acquaintance gets murdered on her doorstep. The chase is fast and rich with paranoia as Julie Guilles flees across country from New York City to Santa Fe in the hopes of finding the mysterious “Blackbirder” who smuggles people across the US border. This is a good thriller, along the lines of Graham Greene’s The Third Man or The Ministry of Fear. This kindle edition was kind of shitty, but if you see a copy or anything else by Hughes, you’d be wise to pick it up.