One Book, A Bunch of Covers: The Strugatsky Brothers’ Roadside Picnic

The Strugatsky Brothers’ novel Roadside Picnic is one of those books I read when I can’t find anything else to read. I can pick it up, read a bit, at least any of the Red Schuhart sections, then put it down for months on end. I was doing this last week while waiting for some other books to arrive.

For folks who haven’t read it, Roadside Picnic is an SF novel that takes place in a city after an alien visitation. These aliens are gone, but they or their technologically advanced artifacts have altered a section of the city. This area’s now called the Zone, and it’s heavily guarded and contained, but deserted. The area around the Zone is thick with operatives from various multinational companies and world governments. A thriving black market in alien artifacts exists fed by adventurers, such as Red Schuhart and others, who risk their lives exploring the Zone.

It was the basis of a Tarkovsky flick and a video game and  you can make world parallels to Chernobyl, the Korean DMZ, and the Varosha area in Famagusta.

Anyway on to the covers–we’ll start with the non-anglophone ones since the book was first published in Russia. I don’t know if these copies are Russian or Polish. I snagged them from Goodreads. 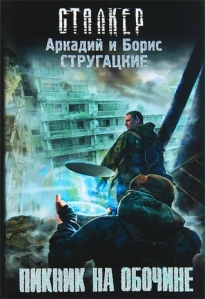 They look like your standard post-apocalyptic SF, and the one on the bottom seems to advertise it’s link to the video game/movie (both are called Stalker), while the top cover makes me a bit nostalgic for the crappy bookcovers of 1980s SF. But only a bit.

Now for four anglophone covers, which are kind of interesting because they show the way the book’s packaged differently for different audiences.

Three of these say SF novel. The top left screams it in all its ugliness. Stalkers are badass lowlives risking life and limb to sneak into a ruined factory in search of treasure. You can’t really be a badass while wearing a silver egghead suit. Top right is the version I own and has a decent understated 70s SF bleakness about it. Bottom left I like-but what it shows, a “full” empty, is boring, especially when you’re book’s about low-life, bad-asses yaddayaddayaddaing.

The fourth cover, bottom right, this one is the least SFnal of them all. Sure, Ursula LeGuin’s name is on the cover, and there’s mention of the movie and video game. But the image comes from the Tarkovsky movie, and there’s that “a new translation”, which I can’t help but read in a hushed, reverent tone. All that makes me think it’s being sold to readers of translated international fiction and Tarkovsky fans over SF fans. I’ve no problem with that, but it’s interesting to see how the book’s pitched for another audience.

Anyway, what do you all think?