OK, Player. You Now Have Four Live Chickens in a Sack inside Your Pack. 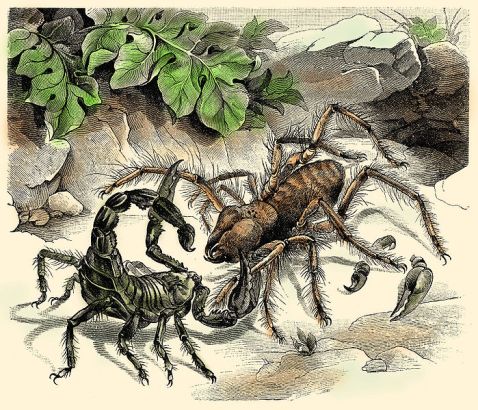 So last night, there was an impromptu session of the Mao Tse Tiger wing of the Kanga Rat Murder Society, mostly ‘cause one player’s leaving Korea soon and wanted to level before he goes.

A bug priest showed up at Fort Low, hoping to find the “great heroes” who defeated the stone devil a few weeks before. Since all but one of those guys died last adventure, the priest had to make do with Thidrek the Sleestak and his new companions, an Orc named Ripper and a mystic named Attius.

The priest’s story: a few days back while digging a new foraging tunnel for the Hive, the diggers entered a cavern where the Great Tunneler had come and gone. They would have explored the cavern but were attacked by some monster. Now they want the “great heroes” to lead a hunting party below and kill whatever might be lurking in the darkness.

There was also some mention of payment in “bright stones”, but what adventurer ever thinks about getting paid?

So the adventurers agreed and went into Hive territory where they could admire the efficient construction techniques of giant insects that live in symbiosis with humans. They reached the new tunnel and met up with their hunting party: two bug tribesmen, two beetles, and their leader who was one of the guys they met in the swamps and called himself Forager, because when in doubt steal from the best.

Down they went into the darkness.

The Nuts and Bolts

I told the players they’d get the XP value for each of the hunting party they brought back alive.

They were cautious from the start, though a bit quick to attack everything they saw such as a trio of lizardmen who’d been trapped in the cavern for days hiding out from the real “monsters”. The lizards had no interest in fighting the party, but took off running the moment they showed up. The party mistook this as a “charge”…

Meanwhile the real monsters, four greater rhagodessa (see picture at top), began moving about in the darkness, setting up their own ambush. The lizardmen got away, and a lucky roll from one of the hunting beetles alerted the party to the fact that something was up.

Did I mention that Thidrek right before leaving Fort Low decided to buy four live chickens? That was one of those moments where the GM asks no questions but says, “Huh? OK, player. You now have four live chickens in a sack inside your pack.”

The party sent a chicken down the passage to determine if something nasty was down there, and sure enough there was, so the party setup their own ambush using oil, a spear wall, and whatnot.

The waiting game started. Or would have except the rhagodessa had more room to maneuver and outflank the party.

By now my map had started to look like one of those football play diagrams with little arrows and scribbly marks on it tracking movements. The party was forced down the passage where the other two waited, but the party was able to protect their backs with a wall of burning oil, so neither side had an advantage.

You know what’s funny? It’s funny when you’re explaining the game rules to someone and say, “Oh, you can do X if you want to.” And the person you’re telling this to says, “Why would you ever not want to do that?” And you just narrow your eyes and shrug, knowing that before the night is done not doing X is going to look like the best idea ever.

Thidrek saved his sleestak-bacon by sacrificing another live chicken. One beetle got gobbled, the other rolled for crap, one tribesman died when his arm got severed, the other survived, the party got bloodied but no one else dropped, except Forager who was saved by a spell from Attius. They succeeded in killing three of the four rhagodessa, the last scuttling away into the darkness. Ripper searched amid a pile of bones but found nothing more than pocket change, because stingy DM is stingy.

The Hive was pleased. The party got paid, and the night ended happily for everyone.

Tags: rpg, vaults of ur

6 responses to “OK, Player. You Now Have Four Live Chickens in a Sack inside Your Pack.”